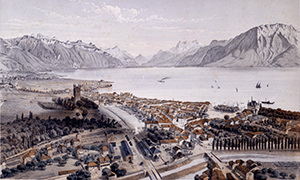 Nestlé is celebrating the 200-year anniversary of the birth of Henri Nestlé, the man who founded an infant cereal business that, after its merger in 1905 with the Anglo-Swiss Condensed Milk Co, would grow into the world’s biggest food and beverage company.

Born two centuries ago in Germany, Henri Nestlé’s sense of scientific innovation, combined with an instinct for marketing and global ambition continues to shape and drive the company today.

“Two centuries after the birth of its founder, Nestlé’s activities bear testament to a remarkable continuity,” said the company’s CEO Paul Bulcke.

“Although Nestlé has increased the number of its products and markets several times over, its passion for quality and the use of the latest scientific research to improve the nutritional value of its products remain unchanged,” he added.

Originally from Frankfurt am Main, Henri Nestlé trained as a pharmacist’s assistant before coming to the Swiss town of Vevey, on the north-eastern shores of Lake Geneva, to hone his scientific knowledge.

It was Vevey where, in 1867, he would later establish his infant cereal business and the small town has since remained the global headquarters of the company he created.

Mr Nestlé’s entrepreneurial gift came to the fore when he purchased a residential property with various outbuildings, including a mill, distillery and warehouse. Here, his chemistry background and creative mind brought varying degrees of success as he manufactured a range of items – everything from lemonade and vinegar to paint and fertiliser.

Although Nestlé has increased the number of its products and markets several times over, its passion for quality and the use of the latest scientific research to improve the nutritional value of its products remain unchanged Paul Bulcke, CEO

A major social issue of the time was high levels of infant mortality. Infant foods did exist, but were very complicated and time-consuming to prepare and generally not to babies’ liking. Milk was difficult to keep and sometimes not pure.

Henri Nestlé believed that the chief ingredients babies required were good quality milk, wheat flour and sugar. Crucially, the starch and acid had to be removed from the flour to make it easier for babies to digest.

The birth of Farine Lactée

He used top-grade Swiss milk to make a concentrated milk and flour baked into a hard biscuit which he ground and mixed with the milk before drying into the final product. “It’s a discovery of major importance with an enormous future,” he enthused about his product, which he called Farine Lactée.

Farine Lactée first went on sale in 1867. A diluted version was given to a local baby born prematurely and not expected to live. The baby recovered thanks to this ‘miracle product’, news spread, and demand for Nestlé’s infant cereal rocketed.

Working with scientists and doctors, Henri had taken the best knowledge of the day and turned it into a successful, easy-to-make product. It was the most complete baby food of its time - easy to prepare, tasty to babies and scientifically sound. It was versatile, too. Fortified with iron and other additives, Farine Lactée could also be adapted as a remedy for nutritional problems in adults, such as anaemia.

A pioneer in marketing techniques, Nestlé modified his own family crest to create the company symbol of a family of birds in a nest. Recognising the importance and power of the image, and of its association with his name, Nestlé resisted attempts to adapt it and it remains the company logo today.

Between autumn 1867 and March 1875 when Henri sold the company, annual sales increased from 8,600 tins of infant cereal to more than million. By 1874, the infant cereal product was being marketed in 18 countries, including Australia, Brazil and Russia, across all five continents.

Henri Nestlé died on 7 July 1890 and continues to be remembered as an entrepreneur who applied his scientific knowledge to meet society’s needs. His persistence and dedication spawned a company which, like its founder, remains committed to using the latest research to improve the nutritional value of its products.

Though the Vevey pharmacist’s assistant who founded the firm could not have imagined the scale and scope of the firm his company would become, Nestlé’s goals today - to be the world’s leading nutrition, health and wellness company – continue to originate from its founder’s initial focus 150 years ago.