Nestlé scientists are the first to develop a theory that predicts with greater accuracy the way in which certain soluble substances will dissolve in water.

It could enable the creation of powdered food and beverage products that produce fewer lumps and a smoother texture when mixed with liquid.

Working with the École Supérieure de Physique et de Chimie Industrielles (ESPCI) in France, the company’s researchers used previously unavailable technology to observe at microscopic range the interaction between a drop of water and a thin layer of sugar.

Two synchronised video cameras recorded the angle at which the water made contact with the sugar, and the speed at which it spread over its surface. 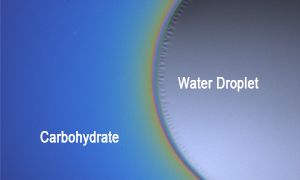 UP CLOSE: Observing the interaction between a water drop and a grain of powder.

The results show for the first time that the way a drop of water spreads over certain soluble substances depends on the amount of water absorbed by the substance, as well as the softness of the part of the substance closest to the water.

It is a major advance in understanding the complex - and until now poorly understood - mechanisms by which soluble powders dissolve in liquid.

The study is published in the journal ‘Physical Review Letters’.

Read the full story:
Getting to grips with lumps