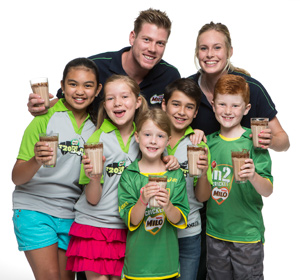 MILO, the brand synonymous with Cricket in Australia, has bolstered its ambassador team with the addition of young Australian cricket stars James Faulkner and Holly Ferling.

The duo follow in the footsteps previous MILO ambassadors and two of the greatest cricketers Australia has ever seen, Michael Clarke and Adam Gilchrist.

“James and Holly were chosen as new ambassadors because of what they have achieved already on and off the field, and because of what is still to come given their enormous potential. I’m proud to welcome them on-board and I’m looking forward to mentoring them through their young careers.”

“It gives me a real sense of achievement and recognition to be put in the same group as some of my childhood heroes like Clarkey and Gilly.”

“I’m proud to fly the flag for young girls everywhere,” said the 18 year-old.

Business Executive Manager for Nestlé Beverages, Evan Gongolidis, said: “We’re very excited to have James and Holly join the MILO family. We have a proud history of supporting some of Australia’s greatest cricketers.”

“We have been associated with cricket in Australia for nearly a quarter of a century, and can’t wait to continue to watch these young cricketers grow.

“These young stars share our passion for inspiring Australians to live healthy and active lifestyles, and they will be part of our family for many years to come.”

The ambassadors will be used to support the MILO T20 Blast and MILO in2Cricket programs in partnership with Cricket Australia.

Nestlé MILO, in conjunction with Cricket Australia, has been supporting junior cricket development in Australia for 24 years, helping to introduce over 6 million Aussie kids to cricket and encouraging them to lead an active healthy lifestyle.