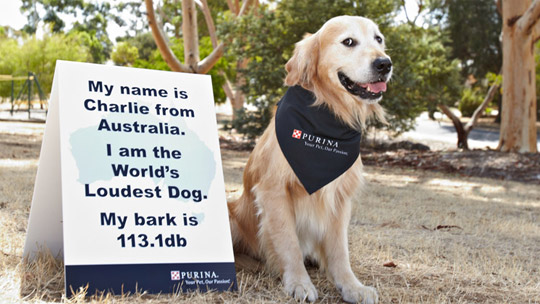 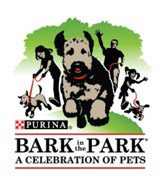 An Adelaide dog has broken the Guinness World Records® record for Loudest Bark by an Individual Dog by barking at an astounding 113.1db, beating the current UK record holder whose bark only reached 108db. The record-breaking bark was produced by six-year-old Golden Retriever ‘Charlie’, at an organised record attempt that took place at Purina Bark in the Park - the doggie social event of the year - in Rymill Park, Adelaide, late last year.

Charlie’s bark of 113.1db was 42 times louder than everyday conversation and the same volume as a loud rock concert! His bark smashed the previous record set in London in 2009 by Daz, a white German Shepherd, bringing the title to Australia for the very first time.

The Loudest Bark record attempts took place at all the Purina Bark in the Park events in five cities across Australia during 2012. The group and individual bark challenges were all facilitated by Purina Ambassador and celebrity animal behaviourist, Dr. Joanne Righetti, and were open to all dogs that could ‘bark on command’. The record attempts were part of the fundraising activities at Purina Bark in the Park that raised a total of $12,913 for the important nationwide charity, the Australian Animal Welfare League.

Over 6,687 dogs attended Purina Bark in the Park throughout the country with Charlie the only record breaker. He was picked out of the group bark attempt in Adelaide, (which failed to break the world record), because of his brilliant barking abilities and was invited to try and break the individual record in Purina’s quest to find ‘The World’s Loudest Dog’. Other dogs in each state tried and failed to reach the sound level required, but after a few goes, Charlie’s bark smashed the record, cementing his place in the history books.

To help dogs and owners prepare for the record attempts, Dr. Jo made a training video to teach owners how to train their dog to ‘speak on command’. Not only is this a fun training activity for dogs, it also helps the owner reduce inappropriate barking. See the training video here: Bark on Command Video

Although the record attempt took place in October 2012, the Guinness World Records® team in the UK needed time to access and process the detailed evidence sent to them by Purina to verify the record. Guinness World Records notified Purina and Charlie’s owner Belinda of the good news earlier this week, and couriered an official certificate from London to commemorate Charlie’s achievement.

‘We are completely astonished that our Charlie is the Loudest Dog in the World!’ said his owner, Belinda Freebairn. ‘He’s a very well behaved dog and doesn’t usually bark at all unless asked to. He’s so loving and a great family pet - he goes everywhere with my three daughters. We are all really excited about his record and couldn’t be prouder of him!’

Fran Hernon, Corporate Affairs and Communications Manager at Nestlé Purina PetCare, said: ‘We are delighted that Charlie managed to break the record at Purina Bark in the Park. We are really looking forward to introducing Charlie to the world in the coming weeks and are proud that he has brought the title of ‘World’s Loudest Dog’ to Australia for the very first time.’