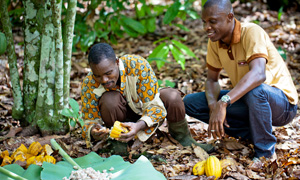 Nestlé has retained its number one position in charity Oxfam’s sustainability scorecard, and improved its ratings on the issues of land, workers and climate.

Oxfam’s Behind the Brands scorecard ranks 10 food and beverage companies on their policies and commitments to improve food security and sustainability.

In the September update, Nestlé achieved a score of 61%, up from 54% in February 2013, and was given a “fair” grading in four out of the seven areas.

On the issue of land, Oxfam said it welcomed Nestlé’s revised sourcing guidelines. The rules make Nestlé the first of the food firms in its index to ensure suppliers get the consent of communities before agreeing land deals for the sourcing of sugar, soy, palm oil and other commodities. However, Oxfam added that it would also like Nestlé to go further to ensure good practice across its supply chains.

On workers’ issues, Oxfam acknowledged that Nestlé recognises workers’ rights, international labour standards and UN business guidelines. And on climate, the group said Nestlé was aware of climate change and recognised requests for suppliers to reduce emissions from farmers.

But the charity said that Nestlé, along with other major players in the food industry, still had to do more.

Nestlé said it supports the efforts of Oxfam and other NGOs to make progress towards a sustainable food system and supports a co-operative approach by civil society, government and business.