As the world worries whether the United Nations’ Millennium Development Goals (MDGs) can be achieved, Nestlé has told the UN how it is boosting its own efforts to help women and children.

The MDGs were designed to provide international leaders and organisations with a benchmark to improve the quality of life for millions of the world’s poorest people by 2015.

EDUCATION: Nestlé will focus on promoting gender equality and education for women and girls.

On Tuesday at the UN, Nestlé was the only food and beverage company setting out the details of its work it is doing to help meet those goals.

Nestlé’s commitments are part of its programme of nearly 300 Creating Shared Value projects in communities worldwide.

Nestlé is supporting a UN initiative known as ‘Every Woman Every Child’ during the 2011 UN General Assembly in New York.

The UN Secretary-General Ban Ki-moon and the UN Foundation launched the initiative last year to encourage governments, businesses and organisations to play a greater role in improving the health of women and children.

Paul Bulcke, Nestlé Chief Executive Officer, told the UN Secretary-General in a letter ahead of the event, “this is an opportunity for public, private and civil society actors to combine forces with a strong focus on the health of women and children.”

This is an opportunity for public, private and civil society actors to combine forces with a strong focus on the health of women and children. Paul Bulcke, Nestlé Chief Executive Officer

At the event, the UN Secretary-General Ban Ki-moon said, “companies are often treated with suspicion when they enter the realm of global development, but they are playing a central role in improving the lives of women and children.”

“I am delighted that despite economic difficult economic times, many governments, companies and civil society leaders are making significant commitments to advance women’s and children’s health. These are smart decisions – visionary leaders recognise the value of investing in the health of women and children,” he added.

Nestlé outlined how its business-related activities and programmes will be scaled-up to focus on promoting gender equality and education for women and girls. Under the Healthy Kids Global Programme, Nestlé commits to work with partners in different countries to teach school-age children the value of good nutrition and physical activity. Benefiting over four million children, the programme will be extended to 51 countries this year.
VIDEO: Healthy Kids in Brazil Running for an Ideal

In India, Sri Lanka and Bangladesh, the Company built toilet facilities for schoolgirls in village schools to increase school attendance in rural areas. By the end of 2010, 52 facilities were built across the South Asian region, benefiting over 25,000 school girls.

In Brazil, a network of women distributes food and beverages, including fortified products, to around 700,000 consumers. On average, these women can earn 40% more than minimum wage.
Expanding the programme across Brazil will mean 350 more women will join the distribution network, and over 10,000 women are empowered as saleswomen. 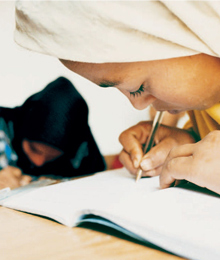 In Pakistan,in partnership with the Swiss Agency for Development and Cooperation (SDC), over 4,000 women in rural areas have benefited from training and access to microfinance, while improving income and food security in their local communities.
VIDEO: Capacity building and training for dairy farmers

And Nestlé’s sponsorship of The Zakoura Education Foundation in Morocco has helped around 80,000 adults, almost all of whom are women, to complete an adult literacy programme. Also, 21,000 school girls have been able to benefit from primary education.

In partnership with the UN, the Company seeks to engage with stakeholders and build key alliances in alignment with Creating Shared Value, Nestlé’s approach to Corporate Social Responsibility.

“Creating Shared Value is the expression of our conviction that only by creating value for society as a whole, we can create long-term value for our shareholders. It is Nestlé’s basic way of doing business, and our priority areas for investment include nutrition, water and rural development,” Mr Bulcke added.