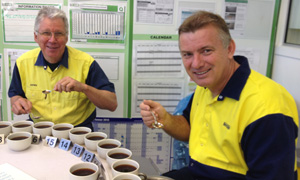 COFFEE TASTERS: Being a coffee taster is just like being an expert in wine.

Between them they’ve slurped, swilled and swallowed more than 500,000 cups of coffee in their job as head tasters at our Nescafé factory in Gympie Queensland.

Although they love what they do, Lindsay Dickfos and Denis Hanlon usually drink tea outside of work!

The pair has been working at the site, which produces more than half of all the coffee drunk in Australia, for a total of more than 65 years.

Lindsay, who started at the factory 35 years ago when it was still manufacturing powdered milk, learnt the art of coffee tasting when the site began producing the iconic Nescafé in 1986.

“It certainly was a big learning curve for me and took six months just to detect any differences in the nuances in the coffee,” Lindsay said.

Lindsay’s job is still much the same today as it was back then, except his tastebuds are thankfully more refined. Each day you’ll find him hand-roasting a sample of every batch of beans that enters the factory which he then grinds and brews for tasting.

“This is where the slurping and sipping happens,” said Lindsay who is now a laboratory operator. “If you haven’t seen it being done, it can be quite amusing but it’s an absolutely necessary part of the way we produce coffee here.”

Now, the man who samples up to 120 cups of coffee a day can often tell which country the coffee beans are from and the variety just by tasting.

“Being a coffee taster is just like being an expert in wine - you get to know what region of the world the beans are from,” he said.

For colleague, Denis Hanlon, his job as a coffee taster and laboratory operator is an art form.

“When people become coffee tasters it really takes them a good year before they can master it and some people are never able to do it. You need a great sense of taste and smell,’ he said.

“The slurping is really important because you must spray the coffee over all the hundreds of little tastebuds we have in our mouths to really get a good idea of the flavour.”

Although the pair rarely drink coffee outside of work, they know what it takes to make a good cup of Australia’s favourite brew.

“I know what makes the perfect cup and we produce it right here at Gympie,” Denis said.