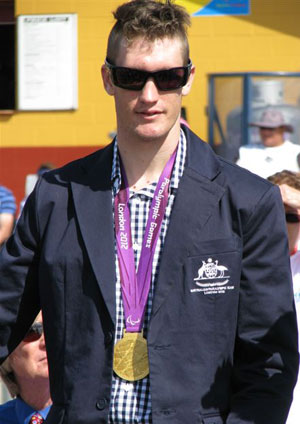 For some disabled students, The Challenge Games was the first time they’d ever competed in a sporting carnival.

Volunteer chair Lynne Derry said The Challenge Games, which have been running in Towsnville for 20 years, was the only large scale sporting event in Australia for children with a disability.

“When the games first started it was very small with just 50 children,” Ms Derry said. “This year we had more than 800 primary and high school aged children from 68 schools across Queensland.”

Ms Derry said the benefits reaped from the sporting carnival go far beyond the event.

“A lot of parents say to us that their child has never been able to participate in a sporting event until coming to The Challenge Games,” she said.

“It’s priceless to see these children who suffer from all sorts of physical and mental impairments walking around with a grin from ear to ear.”

Nestlé Australia sponsored Paralympian and gold and bronze medallist, David Nicholas to attend the games where he was guest of honour.

Ms Derry said having the London Paralympic medallist at the event was a memorable experience for the children.

“David bought his bike so it was wonderful for the children to imagine his gold medal winning moment and be able to talk to him,” she said.

“Having athletes like David who suffers from cerebral palsy come to an event like this is so inspiring for the children – it makes them believe that anything is possible.”

Nestlé Australia’s Group Marketing Manager, Katrina Koutoulas, said the company was delighted they could bring David to The Challenge Games.

“The Challenge Games represents Nestlé’s philosophy that all children deserve the chance to be active and follow a healthy lifestyle.”