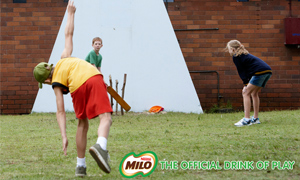 A first-of-its-kind study commissioned by Nestlé’s Milo beverage brand has revealed almost half of eight- to 12-year-old Australian children do not play every day.

In response to the findings the company has launched the ‘Milo Play Movement’, a nationwide initiative to encourage families to incorporate play time into their daily activities.

Play ‘not a priority’

The results suggest there has been a marked shift in playtime behaviours within two generations in Australia.

The majority of parents and grandparents surveyed agreed their children didn’t create their own play or games as much as they used to when they were young.

Although more than 94% of parents believed play was essential for their children’s development, two in five said they struggled to find time to play with them.

More than two thirds of parents said they felt guilty about not playing with their children as often as they should and admitted other demands took priority.

“Many parents assume children don’t need to play regularly after the age of eight.

“In reality, eight to 12-year-olds are at a critical stage of development where active play is extremely important.”

One in three children surveyed said they didn’t have anyone to play with, while more than half said they would like to spend more time playing with their parents.

More than two in five children claimed they were too tired after school, or had too much homework, to play.

More than one in three said they had run out of ideas for play, which may be why they often turned to electronic devices for inspiration.

As part of the Play Movement, the Milo team is organising a series of outdoor events in Australia to inspire families to play more and create their own games.

The ‘play tours’ will give children the opportunity to devise new rules for traditional games and practise their throwing, catching and kicking skills.

Parents can also share their experiences on the Milo Australia Facebook page, which offers expert advice from psychologist Paula Barrett and tips for how to encourage more play time in the family.

A group of Australian mothers who blog on the subject of family life will also be sharing their ideas for playtime as part of the programme.

The Play Movement is the latest initiative from the Milo brand to encourage more young people to be physically active and take part in outdoor activities and sport.

In Singapore, the new ‘Milo Match-Up’ iPhone application helps users find other people with the same sports interests in their local area.

All these activities form part of Nestlé’s global commitment to nutrition, health and wellness.

The company is the main sponsor of the International Association of Athletics Federations’ Kids’ Athletics programme - one of the world’s biggest youth sports development initiatives.