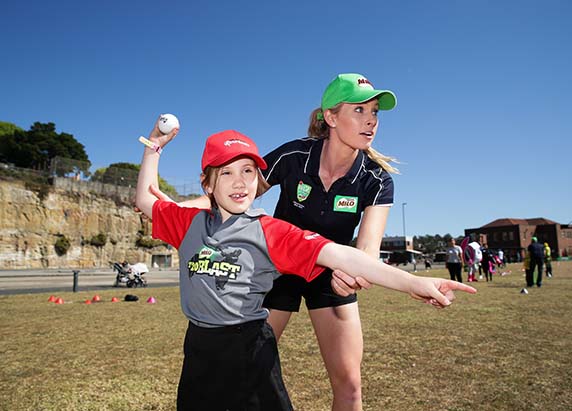 The tour has showcased the fun, inclusive and diverse nature of cricket, whilst also acting as
a mini pre-season for Mr Sutherland, who will be pulling on the whites again this summer to
join his son in a father and son competition.

Mr Sutherland, was thrilled to be at the launch of the junior programs at Cockatoo Island in Sydney.

“MILO’s support for junior cricket in Australia for 25 years has been fundamental to the
success of the junior programs and is one of the longest standing grassroots partnerships in
Australia, and we’d like to express our thanks to MILO for their strong support of the sport.

“All my kids have been through the MILO cricket programs as many other Aussie kids have.
Last season alone we had more than 78,000 kids aged between 5 and 12 across the country
participate in MILO In2Cricket and MILO T20 Blast.

“The programs provide a great way to build kids’ self-confidence and teach them important
values such as respect, sportsmanship and teamwork. Importantly, the programs are all inclusive of
kids’ abilities and backgrounds for girls and boys alike.”

Club cricket - including junior programs such as MILO In2Cricket and T20 Blast - is integral to the sport, the individuals who come together to play in a team and the wider cricket community.Nearly half a million players, or just over 30% of all cricket participants are involved at the club
and community level.

“For parents, it’s hugely rewarding to see their children active and see special moments like a
child taking their first wicket, knowing their child is forming lifelong friendships, learning
important life skills – and maybe experiencing once in a lifetime opportunities like meeting
their cricket idols, or playing on the SCG.

“We thank everyone who’s been part of MILO Cricket programs over the past 25 years, but
especially the parents and volunteers, who put so much effort into helping make MILO Cricket
a fantastic experience for kids,” Ms Stuart said.

Mr Sutherland has visited all eight states and territories throughout this week – an unusual
and original national tour that has seen him showcase all formats of cricket that are available
to the Australian public. Each state and territory has focused on a different area of grassroots
cricket to showcase that cricket is a ‘sport for all.’

“This week I’ve been able to try out a range of cricket activities around the country. From
pulling on board shorts for a session of beach cricket on the Gold Coast, to facing bowling
with a giant cricket bat in Melbourne to show why we have introduced new junior formats to
make the game easier and more fun for children, to playing alongside the All Abilities League
in Perth, and against a boys team at Yirara College in Alice Springs, it has been a one of the
most inspiring and humbling experiences anyone can enjoy,” Mr Sutherland concluded.

James Sutherland along with Australian Cricketers Nathan Lyon and Holly Ferling spoke to
media at Cockatoo Island this morning with images, audio and vision available for free editorial
use.

To find out more about MILO Cricket Programs or to find a local club, please visit
www.playcricket.com.au