It’s no bigger than a single dice. A cube so small you can balance it on your fingertip.

It’s a Maggi bouillon cube: the tiny seasoning product sold in huge volumes across Central and West Africa. In Nigeria alone, more than 80 million are sold every day.

For years, the product was simply a best-selling condiment used to flavour traditional stews and soups.

Today, it’s a small but potentially powerful weapon in the fight against one of the world’s most widespread nutritional disorders, iron deficiency anaemia.

Anaemia is a silent killer

Anaemia is the condition that arises when we have too few healthy red blood cells, or too little haemoglobin, the protein in these cells that transports oxygen around the body.

It affects an estimated 1.6 to 2 billion people in the developed and developing world, with approximately half of these cases due to a lack of iron in the diet, because this vital mineral helps us generate haemoglobin.

A ‘silent’ condition that often goes unnoticed, anaemia can lead to cognitive impairment, decreased physical capacity and reduced immunity. Severe cases can cause organ damage, and even death.

Pregnant women and children are particularly vulnerable to iron deficiency anaemia, which contributes to the deaths of 50,000 women in childbirth a year, and impairs children’s physical and mental development.

Aside from the toll it takes on individuals and communities, anaemia also has a devastating economic impact – lowering productivity at work and increasing healthcare costs.

Along with iodine, vitamin A and zinc, iron is one of the ‘big four’ micronutrients that are essential for our growth and development. But 2 billion people worldwide don’t get enough of them.

Ideally, everyone would have access to a wide variety of nutritious foods that would provide them with the right amounts of the vitamins and minerals they need.
But in many countries, particularly the world’s poorest, this isn’t always possible.

A small yet potent weapon

So how might a Maggi bouillon cube help close this ‘nutrient gap’?

For decades, food fortification has been recognised as an effective way of delivering specific nutrients to people who can’t obtain them from a balanced diet.

By fortifying foods that most people eat regularly, and that they can afford, it’s possible to help them increase their vitamin or mineral intake without changing their existing eating habits.

Staple food fortification programmes – such as adding vitamin A to cooking oil or sugar, and iron and folic acid to bread – have been very successful in reducing the micronutrient deficiency disease burden.

But many people still fail to eat enough nutritious food, and Nestlé is helping to tackle the problem on a global scale by adding relevant micronutrients to its most popular products.

In 2009, the company decided to add iron to its Maggi bouillon cubes and tablets sold in Central and West Africa, in line with its global policy on micronutrient fortification.

“We looked at our product portfolio to identify potential carriers for fortification. Maggi bouillon cubes and tablets were widely consumed across the region, making them an ideal vehicle for iron fortification”

However, adding iron to food poses serious technical challenges. It can alter the taste, and may turn products various unappetizing shades of brown.

“If our bouillon cubes had changed in any noticeable way as a result of fortification, it might have put consumers off,” Klassen-Wigger explains.

That wasn’t the only problem. Fortifying the cubes with iron would also raise production costs. If this meant higher prices, then those in need of such products might find them unaffordable.

The same look, the same taste

So Nestlé scientists spent the next two years identifying and testing a form of iron with a neutral taste, which was easy for the body to absorb. Meanwhile, business managers wrestled with question of price.

The answer? Tweaking the recipe, as Klassen-Wigger explains: “By making small alterations to other ingredients, we were eventually able to add iron to the cubes without making them more expensive.”

In 2012, Nestlé launched its new, iron-fortified Maggi bouillon cubes onto the Central and West African market. They looked the same. They tasted the same. But there was one crucial difference.

Millions of people across the region could now incorporate more iron into their diets, without changing their eating habits.

Maggi bouillon remains immensely popular in Central and West Africa, and the product is helping Nestlé meet its commitment to provide 200 billion servings of micronutrient-fortified products per year by 2016. 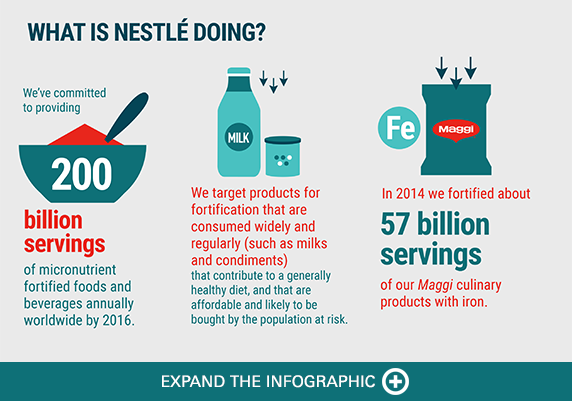 Klassen-Wigger says Nestlé is just at the beginning, in terms of understanding the long-term impact of the product on a serious public health issue that no single organisation can solve alone.

“We’re investing in research to demonstrate that such products do make a difference, and we’re talking to consumers, to help them make more nutritious choices,” she says.

Micronutrient fortification will always pose challenges for any successful global brand. But if a tiny bouillon cube can take the fight to the ‘silent killer’, anaemia, then it’s an opportunity worth pursuing.