The research, commissioned by MILO, found that 61% of parents expressed concern that their children weren’t getting enough activity. This figure increased dramatically to 93% among parents of children who get less than half the daily-physical activity recommendations.

Australia’s Physical Activity & Sedentary Behaviour Guidelines for Children (1), developed by the Department of Health, recommend children between 5 and12 participate in at least 60 minutes of physical activity every day.

Parents fear their children’s lack of activity will result in them becoming unhealthy and lead to health problems later in life (37%). Other worries include their children becoming overweight (14%) and developing low self-esteem (12%). 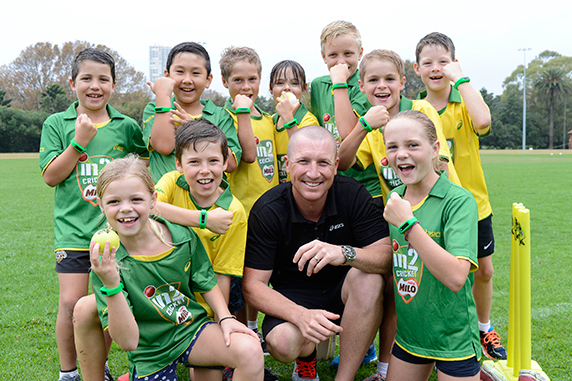 To encourage youngsters to get active, MILO has launched the MILO Champions Band, a new health, fitness and activity tracker designed for kids. The band syncs to an app where parents can check on their child’s activity progress, and in turn help them monitor the balance between energy input and output.

The MILO Champions app (available to download via the App Store or Google Play) is easy-to use, and fits into a busy parent’s schedule.

“As a dad, I do what I can to make sure my kids are healthy by staying fit and active. With a busy schedule, the new MILO Champions Band and app makes it so much easier to monitor my kids’ activity levels and nutritional intake,” he said.

“It’s so easy to use, and most importantly the kids love it.”

Children can use the MILO Champions app to create their own interactive avatar, track their activity, learn new skills across a variety of sports, and compete in physical activity challenges with their friends.

“It’s not always easy to get kids off the couch and into the yard. Introducing a fitness tracker is an engaging way parents can encourage their kids to learn more about daily energy and nutritional needs.

“It’s essential that active children be given the energy and nutrients their bodies need to develop. Instilling healthy habits from a young age makes it a lot easier for them to maintain as adults,” said Ms Kevork.

The MILO Champions pack, which includes the MILO Champions Band and a 450g can of MILO, will be available at Woolworths and online at milo.com.au from April 6 for $39.99 RRP for a limited time only while stocks last.

Additional findings from the study include:

About the study
The study was commissioned by MILO, conducted online during February and March 2016 using a sample of 1,001 parents of children aged between 6-12 years across Australia.

About MILO
MILO is a great nourishing drink made with four main ingredients, which together with eight vitamins and minerals delivers essential nutrients for active kids.

Developed in Australia in 1934, MILO has a proud history of encouraging Australian children to live active, healthy lives.