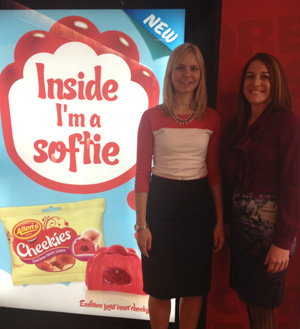 For the first time in Australia’s history women now have a lolly created just for them.

It’s called CHEEKIES and the ALLEN'S team from Nestlé Australia has spent the last two years researching, developing and making it.

Created by a passionate group of women who get to play with lollies every day, CHEEKIES answers what women in this age group have been looking for, says ALLEN'S Marketing Manager, Melissa Oliver.

“Women want an indulgent lolly they can savour and enjoy slowly, rather than scoffing down a bag meant for sharing with friends and family,” she said.

“They really just want something that’s portion controlled, only for them, with different textures to give them a more grown-up experience.”

Never before has a company studied in depth what women aged 35 to 49 really want as a lolly, until now.

According to the ALLEN'S research, Australian women in this age group prefer lollies that have a number of different textures, are chewy, but still soft and not too creamy.

“We’re not the same as women in other countries. Australian women like soft lollies such as chewy jellies whereas European women like something harder.” Melissa said.

The new CHEEKIES ticks all those boxes. It’s a delicious jelly treat with a soft fruit flavoured centre that lingers in the mouth. It comes in portion controlled packs and each serving is around 100 calories.

Melissa said what’s different about CHEEKIES is not just the name but the different flavour combinations, textures, and the portion control packs.

“The packaging is more grown up, the name is more adult…it’s just a great lolly for us grown up women to indulge ourselves.”

Now it’s time to embrace your inner Cheekie and we’ll let you be the judge.