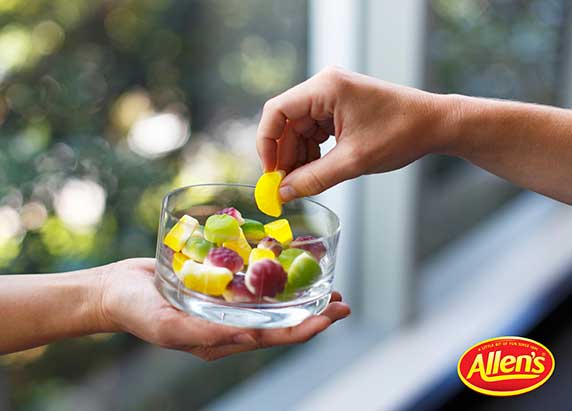 A line-up of three new Fruit & Cream flavours are auditioning to become the Allen’s Fruit & Cream of the Crop, and it’s up to lolly lovers across the country to have their say and pick the winner.

There is a flavour to tempt all Allen’s lovers to vote for their favourite Fruit & Cream – from classic sweet, yet tart green Apple & Cream, to the luscious and velvety Blackberry & Cream, to latest-trend, zesty Yuzu & Cream, a Japanese fruit that offers an aromatic citrus taste.

Allen’s is calling on fans nationwide to cast their vote at allenslollies.com.au/vote and decide which delicious flavour will be launched alongside much-loved Strawberries & Cream and Peaches & Cream, in an all new Fruits & Cream Mix. Fans have one week to select the lolly that will take centre stage.

Nestlé General Manager Confectionery, Martin Brown, said that Allen's always likes to hear from its fans to ensure that the sweets they produce continue to create smiles for all lolly lovers.

“We know that our fans are extremely passionate about being involved in the lollies we create, so again, we’re calling on them to have their say and vote for the Allen’s Fruit & Cream of the Crop!

“We have spent months perfecting the potential new flavours of Apple & Cream, Blackberry & Cream and Yuzu & Cream, ensuring that each has just the right balance of a juicy dollop of fruit flavour on top of a creamy vanilla base.”

Voting opens on Monday 15 January at www.allenslollies.com.au/vote until 1pm on Monday 22 January, with the winner to be announced on Allen’s Facebook page on Tuesday 23 January.

Allen’s Fruits & Cream Mix (170g) will be available exclusively from Woolworths from mid-February for RRP $2.95.