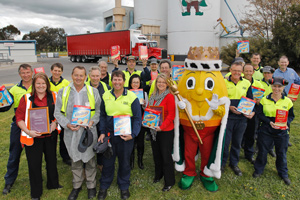 This brings the total donation to more than 20 million bowls of cereal in the last five years.

Uncle Tobys announced today that it will supply an extra 9,600 packets of Vita Brits every month, which will be shared amongst the Foodbank warehouses for distribution to charities and schools for breakfast programs and food relief hampers. That’s an annual contribution of 3,456,000 serves of cereal.

The donation of Vita Brits is in addition to Uncle Tobys existing support of Foodbank. Each year, Uncle Tobys donates a full day’s production of oats from its factory in Wahgunyah as part of the Foodbank Collaborative Supply Program.

“We are committed to contributing to the wellbeing of the broader community so we’re really happy to be able to assist Foodbank in this way and ensure that people who are struggling, at the very least, have access to a sustaining breakfast,” he said.

Foodbank CEO John Webster said the donation by Uncle Tobys was vital for many families who are struggling to put food on the table.

“There are many families in both the city and country who are having trouble supplying basic needs such as food for themselves and their families – in fact, one in 10 Australians half of whom are children experience hunger at some point every year,” he said.

“We’re extremely grateful to Uncle Tobys, the first company to partner with us in the Collaborative Supply Program which is now so vital in ensuring we have key staple items available in our warehouses at all times.”

The companies which partner with Uncle Tobys in providing the breakfast cereal are: CBH and Croker Grain, Amcor Cartonboard and Amcor Fibre, SBA Transport and Frances Transport. Additional funding is provided by the Department of Families, Housing, Community Services and Indigenous Affairs.

Foodbank is the largest food relief charity in Australia providing food for 88,000 meals a day to people in hardship.

Farmers, manufacturers and retailers donate food and groceries including stock that is surplus to need, close to expiry date or out of specification. In addition, Foodbank partners with companies to manufacture essential staple products.

The food goes to more than 2,500 charities and community groups who use it to provide home hampers and emergency relief packages as well as meals in hostels, shelters, drop-in centres and schools. Foodbank’s service means there is one less thing for hard-working charities to worry about so they can concentrate on vital services to get vulnerable people back on their feet.

For a wide variety of reasons, from personal crisis to natural disasters, two million Australians experience lack of food every year. One million of those going without are children. Foodbank has a vision of an Australia without hunger.