Imagine being so strong that you could lift a young bull up onto your shoulders. Legend has it that Greek athlete Milon of Croton, who won six Olympic events during the 6th century BC, could.

This is the stuff of myth, of course. Aside from obvious animal rights issues, even if you could lift a bull, would you want to? Sounds a bit hairy.

But Milon’s myth captures the spirit of MILO, the brand that delivered on our no bull promise – to help build the energy of kids in Australia suffering from poor diets and malnutrition during The Great Depression. 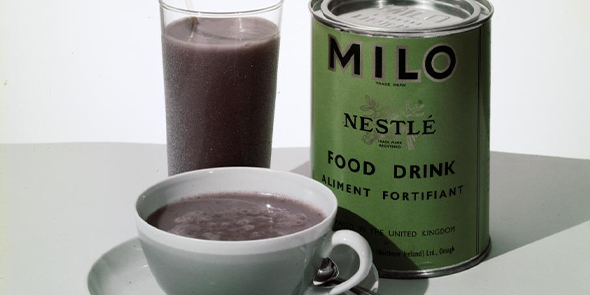 In 1934 Nestlé Australia food scientist Thomas Mayne developed a powdered chocolate malt drink that people could mix with water or milk, and drink hot or cold. He launched MILO at the Sydney Royal Easter Show that year, and drank a cup every day until he died aged 93.

We started making MILO at a factory in Smithtown, Australia in 1934. It still makes MILO more than 80 years on, and MILO’s success is such that it is now made in 24 other factories worldwide, and sold in more than 40 countries.