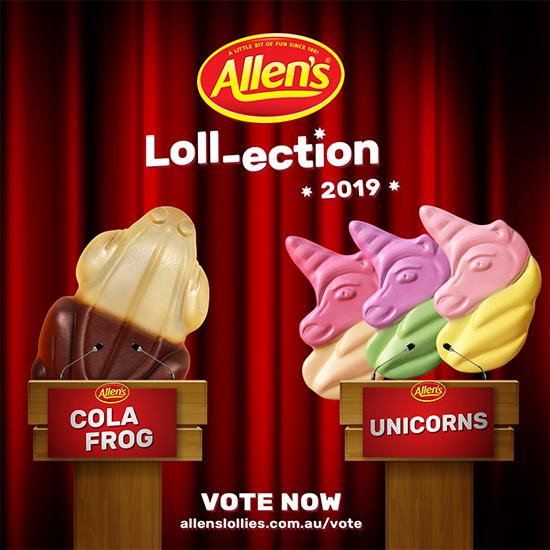 Lolly lovers across the nation are being asked to cast their vote in the sweetest and most important election of the year – the 2019 Allen’s Loll-ection.

The Australia-wide vote will see two delicious candidates go head-to-head at the polls to decide which will secure a place on shelves this year.

Allen’s Cola Frogs are calling on all Aussies to hop into the future and support a cheeky, effervescent leadership. Their campaign offers a new twist on the iconic frog shape that locals have adored since 1982.  Allen’s Unicorns are encouraging people to dream big and support a colourful wave of change, delivering a magical unicorn lolly mix, bursting with fresh and fruity flavours.

Nestlé Head of Marketing Confectionery, Anna Stewart, said the lolly future of the nation is looking bright and is now firmly in Australia’s hands, with the vote open for just one week at allenslollies.com.au/vote.

“We know that Aussies are extremely passionate when it comes to their lollies and we love giving our fans the chance to influence the next generation of Allen’s.

“Allen’s Cola Frogs bring the best of two sweet worlds together, combining the iconic frog shape with the Cola flavour that’s been a hit in Retro Party Mix since ’07. In contrast, Allen’s Unicorns are a new breed, totally on trend and bringing a raft of flavours to the table, including Apple & Blackberry, Strawberry & Peach and Grapefruit & Pineapple.

“With two inspiring candidates in the mix, it’s time for Aussies to make their voices heard and back the lolly they believe will bring the most smiles to our nation!”

For the first time, Allen’s is giving fans who vote the chance to try the lollies, with limited-edition jars of Allen’s Cola Frogs and Allen’s Unicorns available at the Allen’s online store (RRP $30/jar).

This year’s campaign follows the record-breaking 2018 vote where 35,000 fans selected the Cream of the Crop, with Blackberry & Cream ultimately featured in a limited-edition Allen’s Fruits & Cream Mix bag. In 2017, lolly fanatics voted for Allen’s Choc & Cream to go solo in its own bag.

The 2019 Allen’s Loll-ection is open from Monday 14 January at allenslollies.com.au/vote, with polls closing at 1pm on Monday 21 January. The winner will be announced on the Allen’s Facebook page on Wednesday 23 January, with the new bag available exclusively at Woolworths from late February.