How To Read A Label

Information is listed on the Nutrition Information Panel as per serve, as well as per 100g (solid foods) or per 100mL (liquid foods or beverages). If you’re comparing products it’s best to use the ‘PER 100g’ as prepared or ‘PER 100mL’ figures, as not all ‘PER SERVE’ sizes are the same. If you want to check your nutrient intake, check the ‘PER SERVE’ column. Here is an example, taken from MILO Cereal packaging.

So what does it all mean?

ENERGY (kJ): Use the ‘per 100g as prepared’ column to compare the energy (kJ) in similar food products. If you're watching your weight, this will help you to choose products with lower energy (kJ).

PROTEIN: Is important for building and repairing muscle. Make sure you're including a good source of protein at every meal.

FAT: This is shown as total fat and then broken down into fat types.

TOTAL FAT: Foods are considered low in fat if they have 3g or less total fat per 100g.

SATURATED FAT: This type of fat is not heart healthy, so the simple rule is: the lower the amount, the better.

CARBOHYDRATE: Is the best source of energy in the diet. These include both starches and sugars.

SUGARS: Include those that occur naturally (in fruit and milk) as well as added sugars.

SODIUM: Is a component of salt. It is found in many foods, both processed and fresh. Foods are considered to be low in sodium if they contain less than 120mg sodium per 100g as prepared. Choosing low sodium foods is better for your overall.

The ingredient list is in order of the weight used, from the highest to the lowest. In this example from MILO Cereal, the main ingredient is Wholegrain Cereals and so it’s the first ingredient listed. Key ingredients are also listed by their percentage (%) in the product. 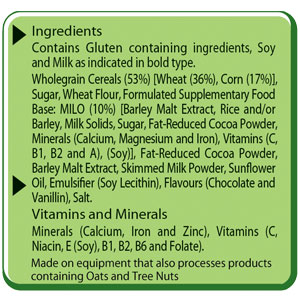