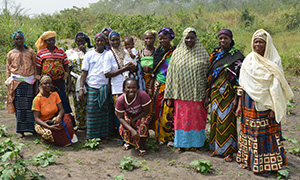 Tackling child labour, one plant at a time

For years it has been viewed as an essential part of the diets of more than half a billion people in the developing a world, a tropical shrub that literally saves lives.

Cassava is one of the world’s most drought resistant crops, capable of growing in almost any kind of soil.

Now this powerful weapon in the fight against hunger is proving useful in another battle - to stamp out child labour in the cocoa-growing communities of West Africa.

Getting children into school

A key cocoa buyer in Cote d’Ivoire, Nestlé has been working with the government, with partners and suppliers through the Nestlé Cocoa Plan to reduce the risk of children doing difficult or dangerous work on cocoa farms owned by their families.

Getting children into school is one of the most effective ways to address the problem of child labour.

Partnering with the World Cocoa Foundation, the company has built and refurbished more than 40 schools in the country.

But still many children don’t go to school.

Men collect payment for the cocoa, so the women’s share is dependent on her relationship with the man.

If you can help women generate more income from their activities, so the theory goes, there is more chance that the income will be spent on the family, including paying for the children to go to school.

The World Bank estimates that every USD 10 increase in women’s income has as much effect as an increase of USD 110 in a man’s income.

So Nestlé and the ICI have set themselves a target of helping women earn enough to pay for two children to get an education.

Cassava is a crop traditionally grown by women. Helping more of them to develop small businesses as cassava growers fits with the cultural practices of those communities.

Besides the growing of food crops for the family to eat, part of the production can be sold, giving them a direct income.

This reinforces their economic status both within their households and their communities.

But it is not always straightforward. One of the main issues is land.

Women have very little access to land in their villages. It can be hard even to get land for a demonstration plot.

Their husbands have to be persuaded to allocate their wives a proportion of their land to grow the cassava.

Setting up projects like this can take up to three months and requires a lot of dialogue with different members of the community.

Nick Weatherill, the Executive Director of the ICI says “where we have projects up and running, the initial results have been encouraging. The women we have helped are making more money than they need to send two of their children to school.”

To reinforce these efforts in areas where incidences of child labour have been found, the ICI is also trying to show communities the contribution women make to tasks perceived as ‘male’ like cocoa production.

Field workers take men and women from communities through all the daily tasks that are done in a household.

They show them that beyond the tasks that are traditionally seen as ‘female’, like caring for children, women do a number of other things that make a contribution to cocoa production.

This can ease the process towards discussing further activities aimed at empowering women.

This step by step approach is important because these kinds of initiatives are not easily accepted.

For example, cocoa farmer cooperatives only register the head of the household, usually the husband, leaving the spouse with no status in the cooperative.

Nestlé and the ICI are working to persuade cooperatives to register wives as well as husbands - making the women more visible, potentially giving them more of a voice in how the organisation is run, and making it easier to provide them with services, but this kind of change can be hard for men to accept.

“Small changes like this could make a big difference in our efforts to address child labour,” says the head of Nestlé’s global chocolate and confectionery business, Sandra Martinez.

“Empowering women in their communities, in their families is vital.”

Two years ago Nestlé set up a Child Labour Monitoring and Remediation system in Côte d’Ivoire.

The ICI recruited community liaison people to help monitor and map where children are working, or are at risk of working on cocoa farms.

So far just a handful of those recruited are women, despite the best efforts of those on the ground.

The Overseas Development Institute, a UK based think-tank, estimates that women in cocoa communities work an average of 63 hours per week, of which 26 hours are spent on household related tasks.

In contrast men work on average 49 hours a week, spending less than half the amount women spend on household tasks.

Also literacy and numeracy levels are generally lower among women than men.

The lack of time and the lack of education can both make it difficult for women to take jobs tackling child labour in their own communities.

This is why efforts like the cassava cultivation that fit more closely with the cultural norms of the cocoa communities play an important role in the struggle against child labour.

Helping women to generate their own incomes does not change their lives completely, or their communities.

But the cultural norms that have, in the past, restricted the role that women can play in the cocoa industry can and are being challenged.

A year ago just one of the cocoa nurseries set up under the Nestlé Cocoa Plan was led by a woman. Now eight have female leaders and more will follow.

Step by step, these changes are making a contribution to what the ICI calls ‘rebalancing’ power in families in the cocoa growing areas.

The early evidence suggests that this is getting children out of the fields and into the classroom, a good enough reason to persist in efforts to improve the social conditions of women, children and families in cocoa-growing areas.