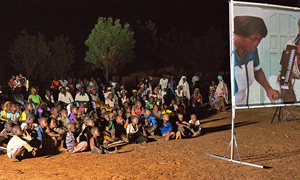 SOAP OPERA BY NESTLÉ: Helping rid West Africa of a toxic compound that can contaminate crops.

A soap opera, projected onto a screen from the back of a truck, is helping rid West Africa of a toxic compound that can contaminate crops, damage health and lead to financial ruin for farmers.

Mycotoxins are fungal-based toxic compounds which are hard to destroy if they enter the food-chain.

If you eat food contaminated by a mycotoxin you can suffer serious health problems. The worst cases can be fatal.

A crop contaminated with a mycotoxin in very high proportions can be worthless. It is difficult to sell because it won’t be safe to eat.

Eight years ago, Nestlé had to reject around half of the locally grown grains supplied to its factories in Ghana and Nigeria because they contained high levels of aflatoxin (a type of mycotoxin that is a potent carcinogen).

A lack of understanding on how to minimise the effects of mycotoxins meant that huge amounts of the grains produced locally were contaminated.

Nestlé had to ensure the contaminated grains did not get into the food chain so maize and other grains were imported to replace the raw materials it rejected and to guarantee it had the supplies needed for production.

Customs regulations and red tape made importing difficult and costly.

The farmers who grew poor quality maize were squeezed out of the market and if they decided to eat grains that had been rejected risked damaging their health.

Nestlé needed to find a solution.

Together with partners in the governments of Ghana and Nigeria, and with the International Institute of Tropical Agriculture (IITA) the company set up the Grains Quality Improvement Project as a means of improving farming practices.

This focused on improving the quality and the safety of the grains produced.

The mycotoxin problem was not going to be solved overnight, so the trainers adopted different strategies to get their messages across.

Farmer training started in the classroom, but not everybody responds well to that kind of instruction.

So the agronomists took the farmers into the fields to visit well-run farms that produced good yields and good quality maize.

Then they showed them ruined crops. The contrast helped to bring out the benefits that could be gained by following good agricultural practices.

In the evenings a mobile cinema was set up in a village showing a soap-opera, created by Nestlé that reinforced the messages the farmers had received during the training. 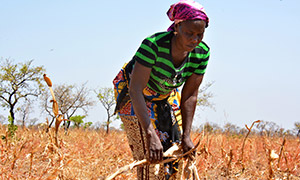 It featured two families. In one a farmer did not listen to the good advice his wife gave him. His crop was ruined and the family fell ill.

In a second family, the man attended the Nestlé Grain Quality Improvement training. Unlike his friend, he listened to his wife and the family produced a good quality and healthy crop that could be sold at market.

The soap opera featured locals playing the roles, ensuring that the content was relevant to those watching.

Eight years after the training programme was launched, the results are impressive.

Today, Nestlé has slashed the rejection rate for grains at the factory gate from 50% to just 2%.

That means better incomes for farmers, reduced health risks for them and their families and a reliable, sustainable supply of locally produced grain for the company’s factories.

Skilling up thousands of farmers

Around 50,000 farmers, and their families, have been trained and educated about the health effects of mycotoxins and the measures needed to prevent them.

“A lot of farmers in the region are smallholders, so it wasn’t easy to reach them,” says Klutse Kudomor, a Nestlé procurement manager based in Ghana.

“It required a lot of effort. The training had to be repeated regularly to ensure they were adopting best practices and sticking with them.”

I can now pay my children’s school fees and afford to sew them school uniforms. And I even have some extra income. Samata Alidu, Maize grower

Maize grower Samata Alidu from the northern Ghana village of Gushie says incorporating better practices to mitigate against mycotoxin contamination have delivered her a bigger and healthier crop - and income.

“I can now pay my children’s school fees and afford to sew them school uniforms. And I even have some extra income," she says.

She has doubled her maize production and cut out waste.

"The impact on our community has been immense’’, she adds.

Nestlé now sources locally all the grains used in the production of its infant and family cereal products Golden Morn and Cerelac; no longer needing to import raw product.

Current import restrictions on commodities in Nigeria have underlined how important it was to establish a reliable local supply chain.

In the meantime the soap opera continues its journey through the countryside.

It is still being shown in village after village, night after night, helping communities protect themselves and their livelihoods no matter how far they live off the beaten track.