A 21 year old dog handler is gearing up for one of the biggest competitions of his career as he sets to compete with his prize Borzoi, Murphy at the Purina ProPlan Sydney Royal Dog show this Easter.

Shannon Barden, from Bishops Bridge in the Hunter Valley has been competing since the age of 7, and has more than 70 ‘Best in Show’ titles under his belt.

His prized dog, Murphy, has racked up a host of titles over the last five years, representing NSW at the Australian Dog of the Year contest in Canberra for 2013 and 2014.

Speaking of the competition, Shannon, a Purina ProPlan ambassador, said he was thrilled to be back at the Purina ProPlan Sydney Royal Dog show. “Murphy is currently the number two in the country and looking better and better so he has a great chance of performing strongly for the title of Best in Show,” he said. 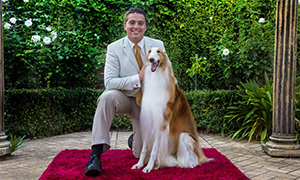 Shannon and Murphy will be competing on Thursday 26 March in the Purina ProPlan Sydney Royal Dog show which will run for the entire duration of the Sydney Royal Easter Show. If the duo come up trumps they’ll then be back to compete for the Best in Show title on Monday 6 April.

More than 3,500 dogs from Australia and New Zealand are expected to compete for a range of hotly contested titles.