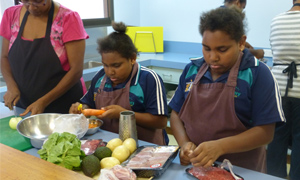 NUTRITION EDUCATION: Working with Aboriginal girls aged 11-18 and their mothers.

Nestlé is teaching women and teenagers in Aboriginal communities in Australia the value of nutrition expertise and healthy eating education through a new initiative.

The ‘Aboriginal Youth Development Programme’ is working with aboriginal girls aged 11-18 and their mothers across the country, educating them on balanced diets, the benefits of exercise and culinary hygiene.

As part of the project, a number of initiatives are to be expanded over the next year including the ‘Mother Daughter Nutrition Programme’, school based traineeships, training and development, youth centre volunteering and mentoring.

“Nestlé Australia has taken a significant leadership role to build a working relationship with the Indigenous population in Australia based on mutual respect and empowerment,” said Mick Gooda, Aboriginal and Torres Strait Islander Social Justice Commissioner, of the Australian Human Rights Commission.

“The focus on young Indigenous women and teenagers in Australia is to be applauded, not only for taking the initiative, but also the respectful way Nestlé has gone about building such relationships, which will produce a long-term sustainable improvement to people’s lives.”

Recent statistics by the Australian Human Rights Commission revealed that chronic diseases, in particular non-communicable diseases such as diabetes and heart disease, are the most significant causes of mortality and morbidity among Indigenous people in the country.

As part of the project, qualified mentors and staff from Role Models and Leaders Australia are working with Nestlé in Western Australia and the Northern Territory to support more than 600 young aboriginal girls. This is through innovative programmes on health and nutrition, as well as training and development opportunities.

The Nestlé ‘Mother Daughter Nutrition Programme’ is helping Aboriginal women and teenagers cook simple and well-balanced meals with guidance from Nestlé chefs and nutritionists in Alice Springs and Darwin. Next year, the initiative will extend to schools in Western Australia and New South Wales.

School based traineeships within the Nestlé sales team in Perth provide Aboriginal girls with work experience to expose them to different work environments. This programme will be expanded to New South Wales by next year.

“We wanted to see how we could support Australian Indigenous people most effectively, consulting widely with Indigenous communities and leaders,” said Graham Campbell, Chief Executive Officer for Nestlé Oceania.

Commitment to women and children

The company recently made an announcement to support the United Nations’ ‘Education First’ initiative at the 2012 UN General Assembly in New York.

It follows Nestlé’s pledge last year to back the UN’s Every Woman Every Child initiative to encourage governments, businesses and organisations to play a greater role in improving the health of women and children.

The MDGs were launched in 2000 to provide international leaders and organisations with a benchmark to improve the quality of life for millions of the world’s poorest people by 2015.

Nestlé’s commitments are part of its Creating Shared Value programmes in communities across the globe.

Under the Nestlé Healthy Kids Global Programme, the company is working with partners in different countries to teach over six million children in 60 countries the value of good nutrition and physical activity. By 2016 it aims to extend the programme to 70 countries.

Nestlé New Zealand is partnering with local community organisations to teach young people in South Auckland how to cook healthy, tasty and affordable meals, as part of the new “Cook for Life” programme.

Nestlé is also encouraging teenagers in Poland learn to cook balanced meals for themselves through a nationwide education programme called ‘Eat Tasty and Healthy’.

Read more about Nestlé’s commitment to women and children worldwide:
Nestlé supports the UN ‘Education First’ initiative
Nestlé commits to support the UN Every Woman Every Child initiative
Nestlé encourages teenagers in Poland to cook for themselves