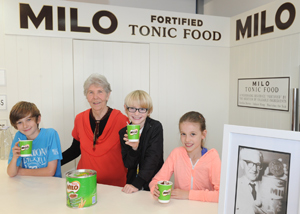 MILO, the iconic and much-loved Australian brand, is today celebrating its 80th anniversary. Launched in 1934 at the Sydney Royal Easter Show, MILO is still Australian made and continues to provide the same great MILO taste and nutritional benefits to fans at home, and around the world.

MILO was created for Nestlé by Australian food engineer, Thomas Mayne – affectionately remembered as Mr Milo – during the depression as a direct response to the fact that children were not receiving the nutrients they needed. Today, the role of MILO in kid’s diets is just as important. A glass of MILO and milk is rich in protein and contains 12 essential vitamins and minerals.

Still produced in the original production plant in Smithtown – a small regional town on the mid-north coast of New South Wales – MILO has become common place in the everyday Aussie household. Over two million cans of MILO are produced every year – that’s over 480 million cups, enough to fill 480 Olympic swimming pools! And it’s not just here in Australia that MILO is so popular – it’s enjoyed by over 40 countries worldwide.

It’s the Aussie fanatics that have sparked the great MILO debate around how it’s enjoyed. Milk first or MILO first? To stir or not to stir? Hot or cold? This conversation has been around almost as long as MILO itself. Thomas Mayne, the creator of MILO, had four children who were brought up drinking MILO, and their children have been raised just the same. In an interview in 1934, it’s said that Thomas spent many hours trying to make MILO dissolve more readily into cold milk, but on hearing that children, including his own, enjoyed eating the crunchy top layer, he gave up. To this day, the unique MILO crunch and the malty taste are the most popular things about it here in Australia.

We’re thrilled to be marking 80 years of one of the most iconic, distinctly Australian brands. Back in 1934, little known to Thomas Mayne, he was creating something that would become intrinsic to our culture, enjoyed for generations and loved across the globe.Rebecca Dobbins, Head of Marketing for Nestlé Beverages

Margaret Butterworth, daughter of Thomas Mayne, said: “I remember that my father would always have a cup of hot MILO before bed. It was the topic of many conversations in our household as I’m sure you can imagine – and my mother was the guinea pig for all the recipes up until the one that is still produced now.”

Head of Marketing for Nestlé Beverages, Rebecca Dobbins, said: “We’re thrilled to be marking 80 years of one of the most iconic, distinctly Australian brands. Back in 1934, little known to Thomas Mayne, he was creating something that would become intrinsic to our culture, enjoyed for generations and loved across the globe. Every Aussie has a MILO memory, from after school sports to family breakfasts, and we’re proud to be celebrating those memories along with the incredible work of Thomas Mayne this year.”

To mark the occasion, MILO will celebrate its 80th anniversary by returning to the very place it was first launched – the Easter Show. The original 1934 MILO Bar will be re-created from its launch all those years ago, complete with an authentic fairground game, a visual journey of the MILO story and of course, refreshing MILO for visitors.