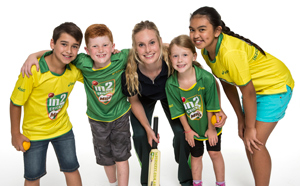 Holly Ferling is only 18 but she’s on the verge of becoming a household name.

The gifted teenager from Charleville in Queensland is one of the rising stars of international women’s cricket.

To add to her already impressive sporting career, Holly was recently announced as the MILO brand’s first ever female ambassador.

For nearly a quarter of a century MILO has been supporting junior cricket development in Australia and helped to give more than six million children the chance to play the game.

Holly is a graduate of the MILO In2CRICKET program and joins current ambassador and Australian cricket captain, Michael Clarke as well another young cricket star, James Faulkner, on the MILO team.

According to Holly being chosen as a MILO ambassador is a dream come true. Never in her wildest dreams did she imagine ever playing for her state, let alone her country then becoming the MILO brand’s first female ambassador.

She sees her role as inspiring kids, especially girls to take part in cricket – a sport that has been traditionally male dominated.

“I will be doing whatever I can, helping to run coaching clinics, giving tips and making appearances – this is a wonderful opportunity to open up the sport to more girls who hopefully will make a career out of it.”

Holly who represented Australia in the women’s team against England at The Ashes this year and also at the ICC World Twenty/20, said she hoped to alter the common perception that cricket is just for boys.

Holly, who began her sporting career playing backyard cricket with her younger brother Lane, said she had no idea women’s cricket existed until she was asked by a friend to trial for a district primary school team. She then went on to make the Queensland team two months later.

“I actually played my first men’s match when I was 13 and ended up taking a hat trick off the first three balls I bowled,” she said.

“They taught me exactly where to bowl and I guess it was always good to say you bowled the boys out.”

Holly, who has recently returned from playing in the Commonwealth Bank Southern Stars in Bangladesh, is in her first year of a degree in Health, Sport and Physical Education at the University Queensland.