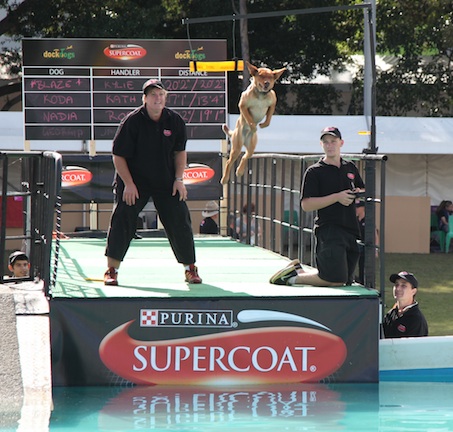 Today audiences at the Sydney Royal Easter Show, watched on with amazement as a former rescue dog, BLAZE, the Australian champion of Dock Dogs took a giant jump into a 100,000 litre pool as part of the SUPERCOAT SPECTACULAR.

Dock Dogs is one of the fastest growing dog sports across the globe and is just one of the activities on display at the SUPERCOAT SPECTACULAR that includes a group of over 70 rescue dogs trained at the Australian Canine & Sports Centre.

“BLAZE only started training for Dock Dogs in January this year. It really helped with some of his anxiety issues and he was having fun so we went to the Nationals and he is now the biggest jumping dog in the Southern hemisphere.

We’re very proud of him and are excited for Sydney to meet him and cheer him on to break more records,” said his owner/trainer Aleigh Fargher.

You can still catch BLAZE and this amazing display on Thursday 17 April and Monday 21 April at the SUPERCOAT SPECTACULAR with performances including Treiball, K9 FUNgility, Dog High Jump, SUPERCOAT Tricksters and Canine Disk.

For more information about the dog activities at the Sydney Royal Easter Show visit:
http://www.purina.com.au/show/events-and-activities