With daylight savings coming to an end this weekend, millions of Aussies are getting up for work or school this morning with the weight of shorter daylight hours on their shoulders, and soon to be on their waistlines.

Research by the UNCLE TOBYS team has uncovered that our willpower to exercise and eat right falls in direct correlation to the change in season, with half (50%) admitting to eating more in winter and more than a third (35%) confessing to consuming extra unhealthy food in cooler months. While a fifth (21%) admit to disguising their weight gain behind more layers of clothing.

The OatSmart Winter Research by the UNCLE TOBYS team also uncovered that almost half of Aussies (46%) will be dropping their morning exercise and a third (32%) will become less productive and active at the start of the day.

As a result, over a quarter (27%) claim they feel tired, sluggish and mentally deflated (28%) thanks to lower energy levels and feelings of vitality. 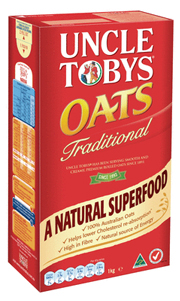 UNCLE TOBYS ambassador and respected nutritionist Catherine Saxelby comments, “The temptation to become less active and indulge in unhealthy foods over winter is something that affects all of us. As we cover up in winter clothing and shelter from colder days, it takes more willpower to get outside to exercise and stay healthy, especially in the mornings. But it’s important to keep your health and wellness up all year round, and a hearty, warm breakfast of UNCLE TOBYS Traditional Oats is a great way to get some motivation back into your mornings and enjoy nutritious, energising, 100% natural start to the day.”

Nilani Sritharan, UNCLE TOBYS Regional Nutrition Manager comments, “Our research found that almost of half of Aussies (45%) find that oats give them the energy they need to get through their winter mornings. As one of nature’s superfoods, oats are a great way to stay on track during winter time and kick start colder mornings with a hot and filling breakfast. They are a natural superfood because they are high in fibre known as beta-glucan, a wholegrain, with cholesterol re-adsorption lowering properties and are a complex carbohydrate.”

The OatSmart Winter Research results are based on a survey conducted by Added Value, in December 2012 on 2,080 respondents aged 18-64 in Australia (on a per capita representation).

Since 1893, UNCLE TOBYS has been providing Australians with delicious, nutritious food. That’s because we believe that healthy eating supported with an active lifestyle, makes for a happier life. By continuing to serve families, communities and our farmers, we remain committed to the health and happiness of future generations.