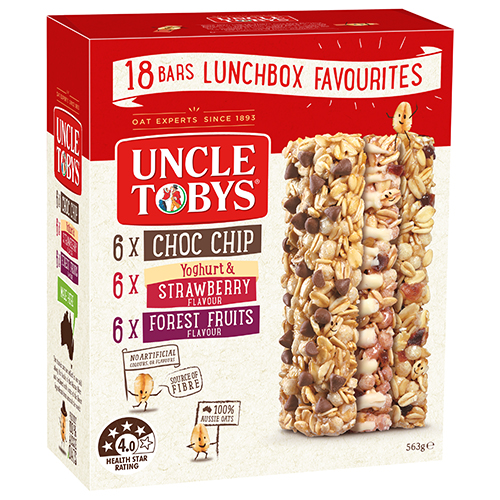 Almost half of all Aussie primary school kids bring lunch home uneaten once a fortnight, one of the most widespread surveys into what children eat at school has revealed.

The UNCLE TOBYS Fuel for Thought Report found that 45 per cent of parents swap healthy options for treats every week, while over half of parents pack three or more snacks a day.

The report uncovered 1000 parents’ top priorities when packing a lunchbox, and found nutrition was on top, followed by whether the food offered enough energy to keep kids going throughout the day, and whether the food appealed to children.

While the focus of feeding children at school is often centred on lunchtime, Accredited Practising Dietitian Natasha Murray said children should be fuelling their bodies and brains with nutritious snacks more regularly.
“In some schools lunch can be as late as 1pm, so regular fuelling with healthy food throughout the day is important to keep their brain working at its best,” Ms Murray said.

According to the report released today, around 36 per cent of dads said health was the number one priority when packing a school lunchbox, while 32 per cent of mums focussed on ensuring enough food goes into the lunch boxes to keep their kids going.
It also found that when choosing packaged snacks, 47 per cent of parents are concerned about sugar, while 30 per cent believe Health Star Ratings help them make informed choices.

The report coincides with the launch of the first major overhaul of UNCLE TOBYS muesli bars in the brand’s history, creating Australia’s largest range of 4 Health Star Rating muesli bars. Both the UNCLE TOBYS Chewy and Yoghurt muesli bar ranges now have more wholegrain, while sugar has been significantly in the Yoghurt muesli bars range.
The project to redesign the bars required a $7 million capital investment in new equipment at the factory at Wahgunyah in regional Victoria and took two years to complete.

Ms Murray advises parents to get children involved in planning snacks and lunches. “Offer healthy foods and snacks you know will fuel them throughout the day, and let children choose options they like,” she said.
“Get kids involved in preparing food and even packing the lunchbox – it’s well known that kids who help prepare food are more likely to eat it.”

Tips on packing a healthy lunch box:
1. Get kids involved in the planning of food for recess and lunchtime
2. Keep it simple
3. Offer up to four healthy snack options then let the kids choose
4. Make sure there’s at least one piece of fruit in their lunchbox every day
5. Provide fruit ready to eat
6. Make sure wrapped food can be opened easily by kids